WSE Institute 26/04/2013 Comments Off on WSEF 2013 – Press Conference in Budapest NEWS
The 3rd World Sustainable Energy Forum was presented to the press by Dipl.Ing. Goekhan Yildirim, CEO of Reviesta Consulting Group, Budapest 22 April, 2013. Located at European Chamber, Mr Yildirim and the president of EuCham, Michele Orzan, introduced the Forum about Sustainabilty and Green Cities to the public. 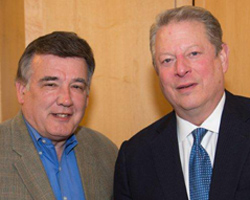 We are pleased that Massachusetts Senator Marc R. Pacheco will present a video message at WSEF from Al Gore’s (the former Vice President of the United States of America) Climate Reality Project.

Al Gore spends the majority of his time as chairman of The Climate Reality Project, a non-profit devoted to solving the Climate Crisis. He was elected to the U.S. House of Representatives in 1976, 1978, 1980 and 1982 and the U.S. Senate in 1984 and 1990. He was inaugurated as the forty-fifth Vice President of the United States on January 20, 1993, and served eight years.

During the Administration, Gore was a central member of President Clinton’s economic team. He served as President of the Senate, a Cabinet member, a member of the National Security Council and as the leader of a wide range of Administration initiatives.

He is the author of the bestsellers Earth in the Balance, An Inconvenient Truth, The Assault on Reason, and Our Choice: A Plan to Solve the Climate Crisis. He is the subject of an Oscar-winning documentary and is the co-recipient, with the Intergovernmental Panel on Climate Change, of the 2007 Nobel Peace Prize for “informing the world of the dangers posed by climate change.”

A forum about sustainability in Vienna

The aim of this event in historical Hofburg Palace is to transfer the know-how from developed countries into the developing countries. Reviesta Consulting Group, the organisator of this forum, mentiones the ambition to expand these technologies to the whole world. According to the company’s press statement 40 countries will support this event! WSEF 2013 will welcome participants from industry and trade, universities, political decision makers municipalities, representatives of authorities, suppliers, planers, constructors and operating companies of pertinent products or plants, – Lobbies.